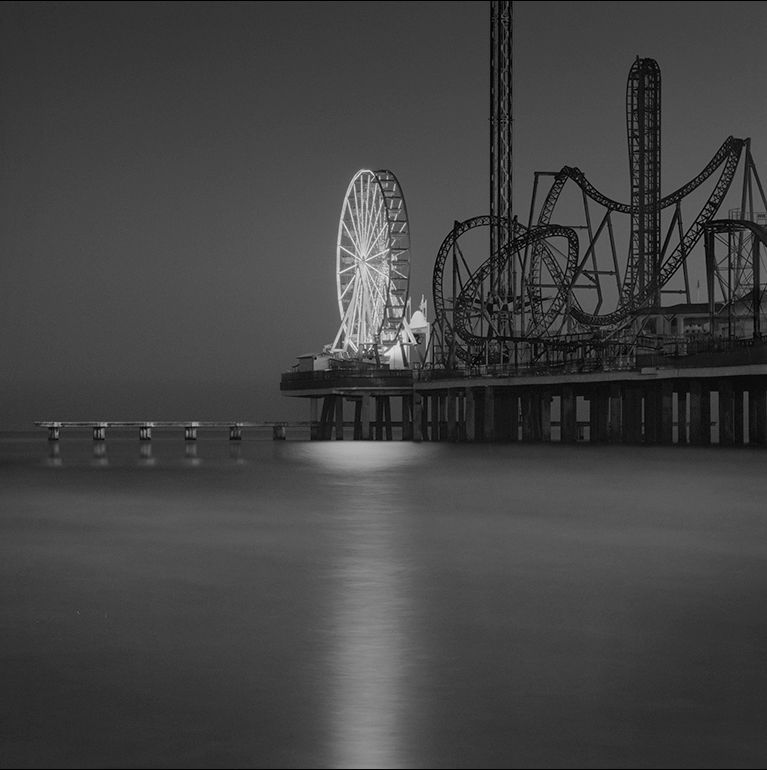 Before and After Series #1 (After/ Edited)

Here's the finished (edited) ferris wheel photograph. The image now delivers what I want to convey - the ferris wheel (center of interest) is now the sole illuminated object in a subdued setting. In the straight image, you see the ferris wheel first, then your eye does what it always will - get pulled to the area of highest contrast in the scene - that being at the extreme right. That's not what I want the viewer to focus on. In order to downplay that area, I needed to reduce the contrast and and then darken it to have it blend in with the darkly silhouetted shapes behind and to the left. I also darkened the reflections on the right in the water. This emphasized the ferris wheel allowing it to shine as a lone beacon in contrast with the now consistently dark elements on the pier. After I did this, I found that my eye wasn't inclined to venture off to the left of the ferris wheel. If an area needs to be paid more attention to, we increase the contrast to increase interest (the opposite of what we did on the right side). Increasing the contrast (especially brightening the brights) in the low lying walkway at the horizon now keeps us engaged with the whole image. Slightly darkening the sky further enhances the brilliance of the ferris wheel. THE LESSON HERE, WHETHER YOU AGREE OR DISAGREE WITH MY RENDITION OF THE IMAGE, IS TO UTILIZE THE CONTROL YOU HAVE OVER WHAT THE VIEWER SEES WITH MERE LOCAL CONTRAST AND BRIGHTNESS CHANGES - VERY POWERFUL STUFF!